China National Textile and Apparel Council (CNTAC), the voice of the textile industry in China, issued a survey report on Friday April 3 for a close look at the reignited production status due to the impact of coronavirus outbreak this year. CNTAC organized a series of online surveys to monitor the production graph, and this new report covers the period from March 3 on the onset to April 1 , after the previous report that was shared in February.

The situation in the latest week (March 25-April 1) is given as bellows:

On company fronts, the 193 member companies responded to the online survey, 1.3 percent higher than its previous week with 98.4% of them starting up their production. There are 293,000 workers already at work in 190 companies, accounting for 94.6 percent of total employment in pre-crisis period, 3.2 percent more than that reported the week before.

On industrial cluster fronts, there were 28 important manufacturing clusters in 13 provinces responding to the survey. According to the questionnaire, there were 66,000 companies inside these clusters already at work, representing 86.4 percent of the number of companies in total textile and apparel manufacturing clusters. Out of which, there were 3954 above-designated-scale companies (Chinese statistics system considers a company with its annual income amounting to 20 million Yuan or more, as big scale company, any companies above this designated scale are taken into national statistical system for understanding economic performance in the country) reported that the production has restarted across the board at 99.1 percent rate.

Over 71 percent workers operational at SMEs 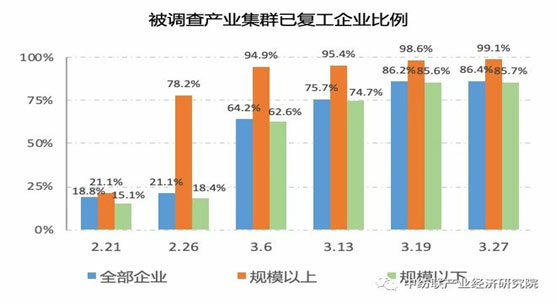 (Note: Blue color for all companies, orange for big companies, green for SMEs)

There are 62,000 SMEs in these 28 important manufacturing clusters already in operation with 1.01 million workers busy on streamline, taking up 71.2 percent of the total number of employees in these production hubs, 5.2 percent point over that recorded in its foregoing week.

A quarter of units face half their business volumes

Exports to the USA hit hard

The COVID-19 ballooned into global pandemic at an amazingly fast rate and the important markets for China’s export shipments are all hit hard, and the United States is one of them, which resulted in a plummet in importing textiles and apparel from China as is seen from the import data sheet –Major Shippers Report provided by Textile and Apparel Office, Department of Commerce, U.S.A.. 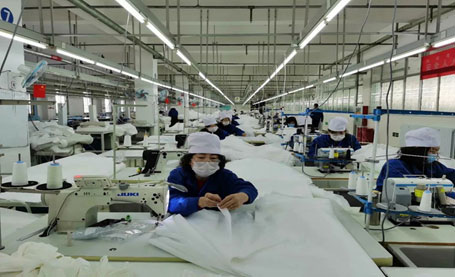 It is not a surprise to see a global slowdown in export business while the number of people infected with the virus is breaking through a million in no time, and it is most likely that it has already outnumbered one million cases at the time when this news is posted on line and it is spreading far and near to affect more than 200 countries, regions and sovereignties. There is no question striving to fight the coronavirus in a way that is properly guided by the government and practically executed by the companies, and the question is how to react to the export situation that goes pretty sure to get worse than that in the years already gone by?