"While fashion shows and women’s glossies are filled with hyper-thin girls, the reality is their body types don’t come close to representing the average American woman. According to researchers, social media has helped spur a wake-up call that has stores, brands and even magazines, realizing the plus-size customer is not just underserved, but that the category is likely filled with pent-up demand."

Research shows social media has been a significant driver in changing the industry’s attitude toward plus customers.While fashion shows and women’s glossies are filled with hyper-thin girls, the reality is their body types don’t come close to representing the average American woman. According to researchers, social media has helped spur a wake-up call that has stores, brands and even magazines, realizing the plus-size customer is not just underserved, but that the category is likely filled with pent-up demand.

According to the Institute for Health Metrics, most adult women in the U.S. don’t fit into single-digit sizes (the average is 14), much less a runway model’s size 0 or 2. The fact is, 160 million American adults are considered overweight or obese. Among women, almost two-thirds (64 per cent) fall into this category, according to the National Institutes of Health. Thirty-six per cent are considered obese and 8 per cent extremely obese. This rate has been relatively stable since 2010. The NPD Group’s 2015 Women’s Special Size Study revealed the number of teens buying plus-size clothes has nearly doubled - from 19 per cent to 34 per cent - since 2012. 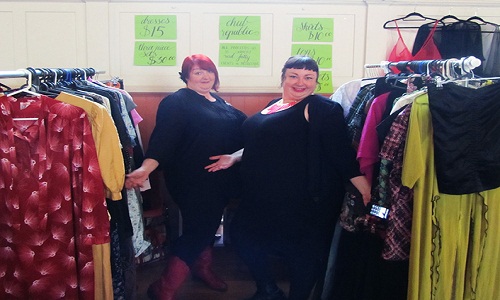 This is a $17.5 billion market, according to The NPD Group, but has the potential for marked growth. Just half of all plus women say they ‘love or enjoy shopping,’ which is significantly less than their non-plus counterparts at 64 per cent, according to a survey. And plus shoppers spend about $42 per month on clothing, which is 37 per cent less than the $67 spent by non-plus women.

Says Fullbeauty Brands spokesperson Dasheeda Dawson, if 2015 was a breakthrough year for plus women and fashion, this year is shaping up to be even more exceptional. Fullbeauty has a number of brands in its stable including Woman Within, Roamans and, more recently, Violeta by Mango. Its ‘Swimsuits4All brand’ launched the curves in bikinis plus-size swimwear campaign in 2015. Featuring plus model Ashley Graham, the campaign was driven by one of the most talked about ads in the Sports Illustrated swimsuit issue.

The newness in the category will help ease the frustration plus shoppers feel. Mintel, a global market research firm, released a report that shows 16 per cent of plus women buy what fits although it doesn’t necessarily mean they like the clothes. Further, Mintel’s found 21 per cent of plus-size shoppers think the styles they really like do not look good on them. However, women under age 45 are more likely than those over 45 to have positive outlooks.

Actress Melissa McCarthy actually took issue with the term ‘plus-size’ when she introduced her Seven7 line of apparel late last year. McCarthy’s collection runs from missy size 4 up to size 28 and is carried in a range of stores, including Lane Bryant, Macy’s, Evans, and Nordstrom. Online retailer ModCloth also ditched the ‘plus’ nomenclature, opting instead for ‘Extended Sizes’ among the brands that go beyond 12.

According to data available, the fact is 77 per cent of plus women say better quality garments are made from all natural fibers such as cotton. And slightly more than half of all plus-size women (51 per cent) are willing to pay more for natural fibers.

When listing the important factors in buying clothes, plus shoppers put fit (78 per cent) at the top, followed by comfort (75 per cent) and then price (67 per cent), data shows. Style (35 per cent) is significantly less important to them than non-plus shoppers (44 per cent). But with the influx of new brands and retailers in the category, that is likely to change.

Bloggers and other consumer advocates have also been successful at influencing retailers to offer plus size…options and to reconsider how they price and market such clothing.

Because of its strong social and website contact, Dawson says Fullbeauty Brands knows its customer expects, and in many cases demands, more fashionable options.