The business climate was intense during the two day as visitors 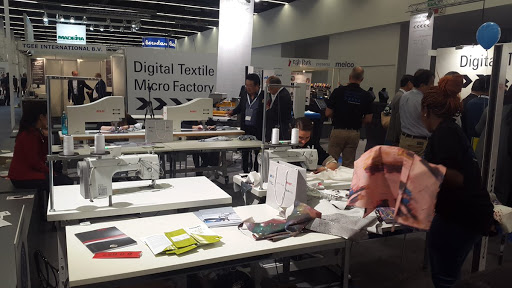 came to see their regular suppliers and as also the latest updates. The days chosen for the fairs matched with the buying period for updating and research for new fashion products distribution all over Europe.

Talking about the expectations of buyers, Isabelle Vermeulen, General Commissioner of the fairs says, “Our exhibitors must have the ability to adapt, fit to the trends and adjust the volumes and deliver quickly. Better reactive and flexible prices were the characteristics of the fairs and that’s what the buyers were looking for.”

Around 2,111 buyers, designers and product managers visited Tissu Premier and Collections over the two days. Big distribution chains were also present. European visitors came in large numbers a proof of the growing interest of foreign buyers for the fairs. “There was an increased turnout of European visitors, revealing a growing appreciation among foreign buyers for the Lille shows’ responsiveness and the new intermediary dates. Great Britain (+45 per cent compared to June 2013), Italy (+15 per cent) and Belgium (+5 per cent) continued to come in growing numbers since June. The proportion of international visitors was up from 25 per cent in June to 34 per cent in November,” says Vermeulen. The fairs also saw visitors from Ukraine, Ireland, Denmark, Israel. “There is a strong demand for manufactured products throughout the European fashion industry. The Lille shows set themselves apart by keeping pace with demand and offering a wide range of on-trend update solutions,” added Vermeulen.”

Vermeulen further added, “We moved from an only price focus to the need for novelty, which created an impulsive purchase. In this context, manufacturers became more and more efficient in terms of creation and quality. If the activity is only based on updating, the fast fabrication of a product and short delays between the design of a model and its notice of sale is hardly compatible with a geographic distance.”

Although all major retail chains were in attendance, the event saw a drop in the number of French visitors, deterred probably by persistently low domestic consumption. The shows attracted cautious French buyers demanding high-quality fashion solutions and impressed by the exhibitors’ responsiveness. Talking about the reason for the drop, Vermeulen explains, “The French visitors were less perhaps slowed down by domestic consumption decrease. The general trend for French consumers is to buy less but better.”