‘India could not seize opportunity when China vacated the space’: HKL Magu

“GST is a great initiative. A single tax has subsumed other taxes,’ says H K L Magu, Chairman, AEPC, praising the government’s efforts and adds, “But there were problems in implementation. Exporters suffered since their funds were blocked and they were unable to pay suppliers on time. Suppliers don’t give advance, since they can’t carry them forward for an indefinite period.” 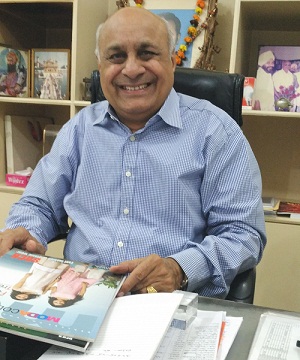 “GST is a great initiative. A single tax has subsumed other taxes,’ says H K L Magu, Chairman, AEPC, praising the government’s efforts and adds, “But there were problems in implementation. Exporters suffered since their funds were blocked and they were unable to pay suppliers on time. Suppliers don’t give advance, since they can’t carry them forward for an indefinite period.”

Exports in September 2017 rose almost 40 per cent because of the special package. “GST Council assured us refunds within seven days. Exporters were told they would get 90 per cent of the refund within seven days. However, for July, August, and September, there were no refunds. Given this scenario, buyers had no choice but to look for other options like Bangladesh, Vietnam and Cambodia,” he explains. Since competitors like Bangladesh and Cambodia already have an FTA with the EU, buyers chose them over India. He points out, “When China vacated the space due to higher cost of production orders were diverted from China to India. But we could not seize the opportunity.”

Dipping exports, a cause of concern

Talking about India’s dipping apparel exports, Magu observes, “Exports started falling in October by 41 per cent. In November, the decline was 14 per cent while December recorded 13 per cent decline and January saw a 14 per cent dip. There has been a month to month decline in apparel productivity.” From a plus 1.3 per cent in April, 2017, May saw a fall of five per cent; June the decline was 3.2 per cent while in July, it was 5.1 per cent. August, September, October, November and December recorded 6.4 per cent, 7.2 per cent, 11 per cent, 13.1 per cent, 13.5 per cent dip respectively. “Overall the dip in production from May to December has been 10.4 per cent. Owing to this, we can’t meet our export target of $20 billion. We will be lucky to do what we did last year. Last year, we clocked in almost $17 billion. However, once refunds start flowing, things will improve. Moreover, free trade agreements will help boost our exports,” he feels.

Magu points out clothing will always be in demand much like food and housing. But there are times when main buyers reduce their inventories because once the season ends they have to sell the stock at discounted prices. “Indeed, business is there but buyers want fast track suppliers. Fast fashion dictates trends. Indian exporters don’t have a great infrastructure and most can’t supply in a short span of time. But China has great production abilities and huge capacities. They can cater to any order, however big, within a specified time while we depend on fabric availability.” He emphasizes while India is good in value addition, embroidery, lace work we are not very competitive in basic items. That’s why India’s exports to the world are not growing.

Speaking about the challenges the industry is facing today, Magu says, no company in the country is showing a profit of more than five per cent as interest costs are high. “The interest subvention that they get are not good enough. There is a need for cut in interest rates.” Moreover, ports in India are not very efficient. In Bangladesh and Sri Lanka, the cargo is taken a day before the ship leaves while in India the cargo is taken seven days earlier. A cargo from Delhi to Mumbai takes three days to move. In Germany, one can do 1,200 km in 15 hours. “We have to wait 40 days for fabrics to come from China. So, we can’t meet the 45 days delivery window. That’s the reason factories lie idle from May to September. For five months, there is no business. Indeed, there are markets like South America and South Africa but their imports are not so high. AEPC sends delegations to these markets and business is gradually improving,” he adds.

He feels, there is still some time for Textile 4.0 to spread out in India but when it does happen the industry will adapt. “We can take up the challenge. Productivity will increase. We can grow only if we have the technology with us. 4.0 will enhance quality standards and we can do fast deliveries and small orders,” he sums up.