Production Expected to Shift Gears by the End of February 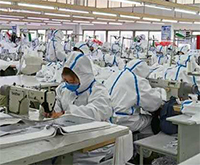 The Survey analysis continues to shed light on production expectation at the end of February after the first part of the report is focused on the situation that was seen and expected before the middle of this month. To our dismay, only 18.1% of all the 1201 respondents under the survey reported to recover their capacity up to over 70% while 23% of them could have 50%-70% revitalized, and nearly 60% of the total companies in the survey are in the view that they are able to get the lines running in 50% or less, a gloomy picture if their answers turn out to be true.

A national online survey in Questionnaires was conducted by China National Textile and Apparel Council(CNTAC) from Feb.7-10, with a report circulated only to limited readership to show a comprehensive outlook and insight of the textile industry by specific sectors in different provinces on the basis of 1201 respondents, just a sample of the whole textile economic fabric if we can see wood and see forest. Continuing here with Part II of survey analysis, as how the Chinese production is expected to pick up by the end of Februry. 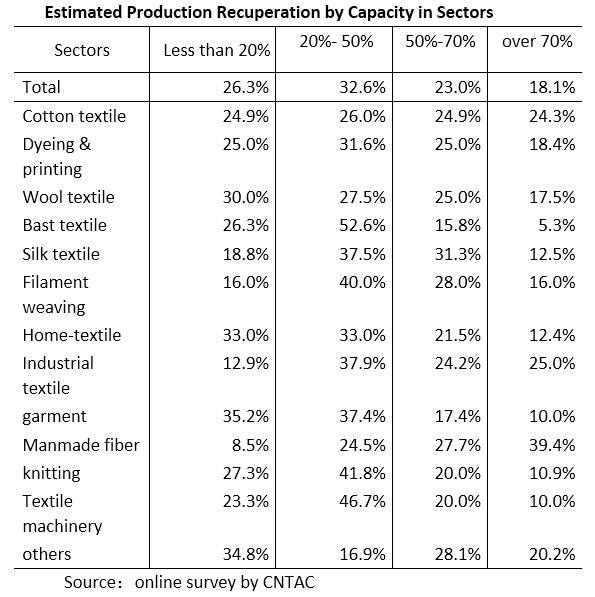 These answers are not persistently consistent if we look into the different sectors in the up-mid-down streams of the whole textile industry. Obviously, as massive consumption on shopping boom is not optimistically foreseen at the moment when consumers are not encouraged to expose themselves to outdoor activities, the garment and home-textile industrial sectors that produce finished goods are subject to a bit harder impact brought forth by necessarily strict measures for disease prevention and control, leading to a slow production recovery, to such an extent that only 10% and 12.4% respectively from these two sectors expressed their belief that they both will re-steam their production up to over 70 percent at the end of the month, far short of what is expected. Noticeably, the number of companies foreseen to run the factory less than 20% of the rated capacity takes up a considerable bulk of the total respondents in these finished-goods sectors, 35.2% and 33% each. Every cloud has its silver lining, the manmade fiber and industrial textile sectors present a sunny side of the picture, with 39.4% and 25% of their companies in the survey promising to regain production to over 70% of the full capacity.

If we see the production to be re-energized to run capacity in the provinces that were chosen as important sampled regions, Henan province in Central China is more optimistic with 43.5% of the respondents ready to gear up to over 70 percent of the production capacity at the end of February. 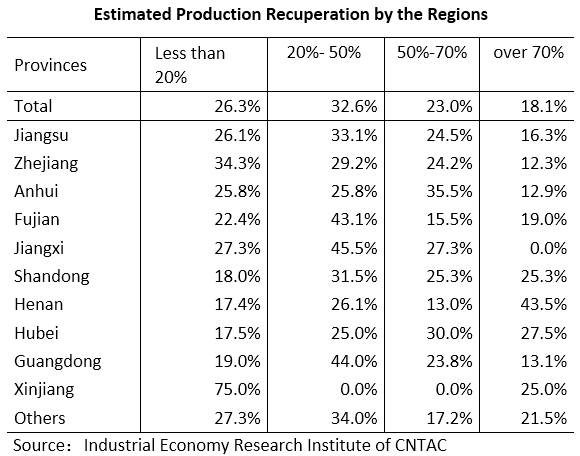 If we see the picture based on companies’ size and scale in the sales income profile and employment, it is reasonable to find that the bigger the company is, the better the company runs in capacity resumed.

The following table shows 30.6% of the big companies are able to recover 70 percent of the installed capacity, while only 10.7% of the small ones can do the same. Some smaller ones or micro companies, 63.9% of them, are devoid of such an aim, expected to resume less than 20% of their production at the best when it comes to the end of February. 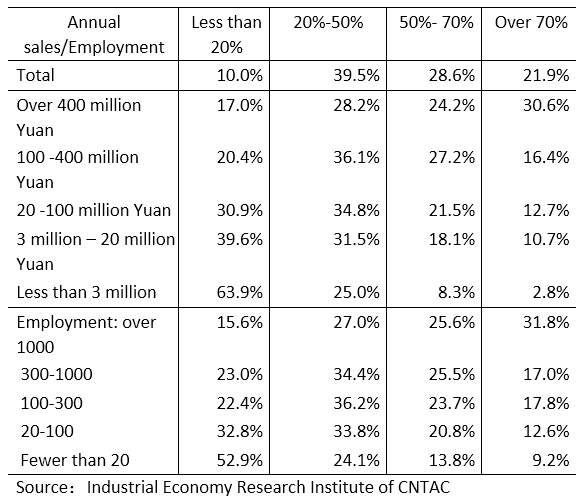