"Fashion is no more limited to elite these days. It has percolated down to the so-called common man who are the real drivers of fashion industry. Everyday individuals wear trendy and attractive outfits, dressing to impress. According to a study released by Statista, by 2025, the global market volume of apparel will amount to $2.1 billion. China will be the largest apparel market in the world, with a market volume of $540 billion. Statista's predicts, China will account for 25.6 per cent of the entire global apparel market."

Fashion is no more limited to elite these days. It has percolated down to the so-called common man who are the real drivers of fashion industry. Everyday individuals wear trendy and attractive outfits, dressing to impress. According to a study released by Statista, by 2025, the global market volume of apparel will amount to $2.1 billion. China will be the largest apparel market in the world, with a market volume of $540 billion. Statista's predicts, China will account for 25.6 per cent of the entire global apparel market.

Deteriorating quality a cause of concern 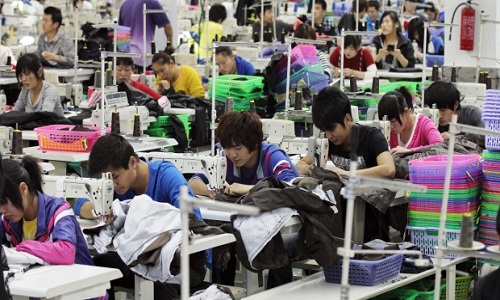 However, the Chinese apparel industry has been facing quality issues of late. Owing to this, some world- renowned  luxury  brands are frequently recalled. In August, the General Administration of Quality Supervision, Inspection and Quarantine of the People's Republic of China issued a recall announcement for some imported luxury brand's Children's apparels, as their pH value and formaldehyde level exceeded China's mandatory standards. European Union (EU) have always been a major market for Chinese apparel industry. From 2011 to 2015, its export value accounted for 24.4 per cent of the total export value. ‘Clothing, textiles, and fashion’ is one of the product category under the Rapid Exchange of Information System (RAPEX) that is generating the most concern. According to statistics under RAPEX, 329 reports in total were related to clothing, textiles, and fashion items, among which, 171 reports involved clothing, textiles, and fashion items from China as the country of origin. This report accounted for 52 per cent of the total reported items.

Inspection, need of the hour

In 2013, cancer-induced aromatic amines were detected in a batch of winter school uniforms manufactured by a Shanghai-based fashion company, thus becoming a hotspot for ‘toxic school uniforms’. This further drew attention from the community. To address such risk, TUV Rheinland, with rich experience in inspections and testing, is able to exercise stringent control over apparel items in accordance with the Regulation (EC) No 1907/2006 concerning the Registration, Evaluation, Authorisation and Restriction of Chemicals (REACH), thereby eliminating the potential chemical risk involved in apparel.

As a global leader in testing, inspection and certification industry, TUV Rheinland's laboratories are accredited certified by Die Deutsche Akkreditierungsstelle GmbH (DAkkS) in Germany, China National Accreditation Service for Conformity Assessment (CNAS) in mainland China, and Hong Kong Laboratory Accreditation Scheme (HOKLAS) in Hong Kong, enabling it to provide the relevant testing and certification services to apparel items in accordance with the mandatory and recommended requirements under the international or national standard and provisions.

Prior to mass production of apparel items, TUV Rheinland assists manufacturers in conducting preliminary testing of samples, which will ensure the safety performance of those items manufactured. During the process of pre-production, production, and post-production of apparel, TUV Rheinland will conduct a sample inspection and testing over finished apparel items in many areas, including outer look, cohesive force, and sharp tips and edges to ensure the overall quality.

Apparels with zippers, buttons, rivets, sequins, or other decorative accessories, need attention to the sharp corners and edges of these small decorative parts. Small parts, including buttons, beads, decorative yarn balls, bows, and fine strings, will pose a potential safety threat to children under 36 months old. Such small parts attached to apparel must be reinforced to eliminate the potential risk of suffocation.

Dark-coloured apparel, as well as items that contain a large area of dye patterns, must be avoided, as these might contain an excessive level of phthalates, which easily poses a threat to the immune system, the digestion system, and the endocrine system. Meanwhile, TUV Rheinland also recommends to pay attention to information published by third-party testing, inspection and certification bodies for purchasing safe apparel items.