‘Denim Playground’ organized by Denimsandjeans.com concluded on October 8, 2015 in Dhaka, Bangladesh, witnessing a good number of visitors despite many international countries deciding against their travel plans owing to recent attacks on foreigners. The show had about 490 companies and 1,800 visitors visiting during the two days of the event. 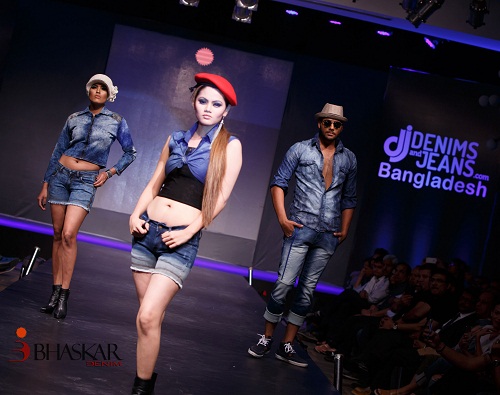 Some of the important global companies from the denim business such as Gap, Levis,Uniqlo, H&M, S.Oliver, Li & Fung, HEMA , Hermes , OTTO , O'stin, Inditex, Mondial , New Times, Next, Perry Ellis, PVH , Redpoint, Espirit among many others were among the visiting companies. Most of the reputed garment factories from Bangladesh also made their presence felt during the show.

First used as a fabric for workwear, denim is now facing a threat from the new-found ‘Athleisure’ trend, as experts point out. But denim has survived and triumphed many such challenges over decades and the challenge has continuously raised the bar of this versatile fabric pushing the denim players to continuously experiment and innovate. The more they stretched their imagination, the fabric evolved.

So the fourth edition of the event took inspiration from ‘Denim Players’, with the theme aptly selected as ‘Denim Playground’, where exhibitors from around the world showcase their sporty innovations. Exhibitors from 28 companies were quite happy with the results they achieved from the show, with many more exhibitors expressing their interest to participate. The playground theme of was well appreciated by the visitors and exhibitors.

‘FASHIONIM’ - the denim fashion show was a huge success with about 400 invitees attending the same. The presentation of collections by Vicunha Brazil, Envoy Bangladesh and Bhaskar India were highly appreciated by the audience.

Various brain-storming sessions and seminars during the ‘Denim Playgrond’ included profitable and environmentally sustainable denim washing organized by technical partners GIZ. Another one ‘Bridging research in cellulose chemistry for denim applications’ by Christian Schimpher from Acticell, Austria and the ‘Re-definition of Denim’ by Zafer Bozdag , Turkey were also held during the show.

Denimsandjeans.com also announced the launch of their unique online initiative – ‘De-Brands’ online show at http://onlineshow.denimsandjeans.com/: the first of its kind online global denim show. The event also organized a competition among the students of Bangladesh fashion universities and students from three universities - NIFT, BUFT and SMUCT participated in the same. 10 finalist students came out with amazing designs considering that it was their first exposure to such products. Three of the students were awarded the trophies for the best designs.