‘Make in India’ boosts India as an alternative production base

"Prime Minister’s ‘Make in India’ concept could bring about sea change in the country’s manufacturing landscape. A recent article published by Hong Kong Trade Development Corporation (HKTDC) ‘Make in India: An Alternative Production Base with a Huge Local Market’, highlights how India could emerge as global powerhouse in manufacturing. It gives an overview of labor cost, supply and quality, along with logistics performance and land costs, followed by an examination of some government initiatives and reforms."

Prime Minister’s ‘Make in India’ concept could bring about sea change in the country’s manufacturing landscape. A recent article published by Hong Kong Trade Development Corporation (HKTDC) ‘Make in India: An Alternative Production Base with a Huge Local Market’, highlights how India could emerge as global powerhouse in manufacturing. It gives an overview of labor cost, supply and quality, along with logistics performance and land costs, followed by an examination of some government initiatives and reforms. 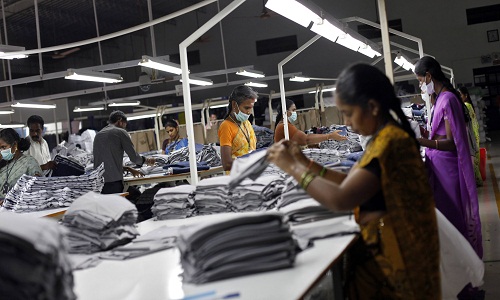 The article says, India is on the rise, not only as a new choice of relocatinglabor- intensive industries from China, but also as a retail market. The country has the third largest GDP in Asia, after China and Japan, with both heavy and light manufacturing activities spread across the country. Heavy industries, including automobile and machinery, are typically found in organized factories. This contrasts with light manufacturing, which comprises a good deal of home-based, cottage industry activity and work subcontracted from factories, as in the case of garment manufacturing.

While China is the world leader in exporting textiles and garment products, many have overlooked India’s position as the world’s second biggest exporter of textile and garment products in 2014, selling a total of $36 billion, during the year, far behind China’s $399 billion. In textile exports alone, India was second after China in 2014, with 5.8 per cent share of the global market, compared to China’s enormous 35.6 per cent share. India stands out to be a substantial exporter in both garments and textiles. In 2014, India imported textiles worth only $3.8 billion, lagging much behind Vietnam’s $12 billion, Bangladesh’s $6.8 billion, and just ahead of Cambodia’s $3 billion.

HKTDC’s research is based on field trips Indian factories, interviews with garment manufacturers et al. Their study noted invariably that the majority of Indian garment producers were focused on the domestic market, as their product quality was generally lower than the standards required by overseas importers. Nonetheless, many big Indian exporters have successfully lined up with international buyers, including department stores, retail chains and brands. In the four years to 2014, India’s garment exports increased at an average annual rate of 12 per cent surpassing China’s 9 per cent, in line with Bangladesh’s 13 per cent and eclipsed by Vietnam’s 17 per cent.

With advantages of raw materials and prospects of vertical integration, India is a place worth considering for factory relocation in relation to labor-intensive manufacturing, such as garment-making. India has been an active player in Asia, securing free trade agreements (FTAs) inside and outside the region, including engaging in an FTA talk with the EU.

While a population of 1.25 billion comparable to that of China, the Indian median age of 27 is way below China’s 37, ensuring a good supply of young workers for many years to come. Labor cost is significantly lower than that of China. In terms of minimum wage, unskilled workers in Haryana and Gujarat are given a monthly basic pay of about $110 (based on respective daily wages of Rs 276 and Rs 292 for 25 working days, excluding any allowance. An abundant supply of low-cost labour in India fulfils the basic condition for conducting labour-intensive manufacturing activities for the sake of factory relocation from Southern China.

India has an added advantage in terms of language. A British colony for a long time, India declared English to be one of the official languages shortly after its independence in 1947, and is now widely spoken across India

HKTDC’s field trip in India covered many special economic zones (SEZs), industrial estates and ports. And goes on to say, India has a highway system that is being upgraded by the government. Besides other government policies aimed at creating a more favorable business environment include the introduction of a unified Goods and Service Tax (GST) expected in April 2016, replacing the existing multiple tax structures of Central and State taxes. Also, attempts have been made to merge and reform a host of labor regulations to streamline the hire-and-fire processes, as well as reducing the costs for business owners.’

The article goes on to state India has been making progress in improving its business environment. The World Bank’s 2016 ‘Ease of Doing Business Survey’ ranked India 130 out of 189, a sizeable leap from 142 in the 2015 survey, with biggest improvements in starting business and getting electricity. Nonetheless, India still needs to further improve its business environment in order to catch up with other Southeast Asian competitors in overseas factory relocation, such as Vietnam (90) and Indonesia (109).

And what works for India is that besides being a production hug, it also offers a huge consumer base with increasing discretionary spending amid robust economic growth. India’s retail market, currently estimated at about $600 billion, and projected to grow at an average annual growth rate of 12 per cent to reach $1,000 billion by 2020. Retail market is currently dominated by unorganised trade. Yet, the retail landscape is fast evolving, with organised retail expected to keep expanding alongside the surge of Indian middle-class consumers, who are more willing and able to spend for better quality goods and services, and tend to develop stronger brand loyalty.