"China is continuing to expand its share in global exports market, while its product mix is becoming increasingly sophisticated and high-tech. Last year, China recorded its first decline in export value since the financial crisis of 2009. This has triggered concerns as to whether China’s export competitiveness is eroding rapidly in light of the competition arising from the emerging number of alternative production bases." 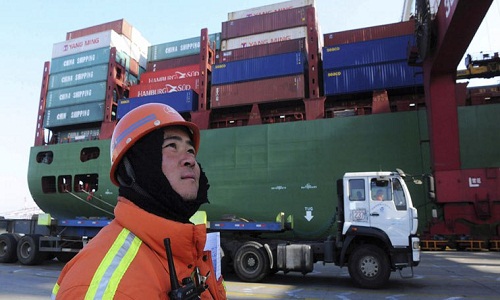 Recently released WTO’s global trade figures show, total export values across the world dropped by 13.2 per cent in 2015, falling to $16.5 trillion. Although China’s total exports dropped by 2.9 per cent in 2015, it had the smallest decline of all the major exporters. Aside from Vietnam, China’s exports were also declining at a slower pace than any of the alternative production bases in Asia. As a result, China’s global market share of merchandise exports continued to increase, rising from 12.3 per cent in 2014 to 13.8 per cent in 2015.

This could distort the overall picture, as merchandise exports include agricultural products, fuel and mining products. If, however, consider only those exports directly affected by production costs, WTO statistics show that China’s share of global manufacturing exports has also continued to increase over recent years, rising from 14.8 per cent in 2010 to 18 per cent in 2014.

While China’s exports remain competitive, as reflected in the country’s market share of global exports, the relocation of manufacturing from China to other production bases, particularly to those in other parts of Asia, has inevitably affected its overall share of exports of labour intensive or lower value-added products. In the case of garments, China’s share in terms of US imports dropped slightly, falling from 39.4 per cent in 2011 to 37.4 per cent in 2015.

Gaining share in electronics and semi-manufactures China has been diversifying its exports away from traditional, labour-intensive, lower-end products to more advanced, high-tech items, including both final consumer products and upstream semi-manufactures over the years. According to WTO statistics, China’ global share of telecommunications exports, for example, increased from 29.4 per cent in 2009 to 39.5 per cent in 2014, while its share of textiles increased from 28.3 per cent to 35.6 per cent.

In household electrical appliances, China’s US import share has generally demonstrated an upward trend, increasing from 39.2 per cent in 2011 to 42.4 per cent in 2015. With regard to extra-EU imports in the same sector, China’s share again increased, rising from 47.4 per cent to 52.1 per cent over the same period.

It is likely that the relocation of final assembly works to alternative low-cost production bases in Asia may have contributed to China’s growing export of raw materials and semi-manufactures destined for further processing. Based on China’s own statistics, a rough estimation shows that the country’s export of raw materials and semi-manufactures recorded an average annual compound growth of 9.1 per cent between 2010 and 2015.

In particular, China’s exports of textiles to Vietnam, the alternative production base for garments is most noticeably. It gained share in overseas markets, and grew by an average annual compound growth of 22.6 per cent between 2010 and 2015. At the same time, textile exports to Bangladesh showed an average annual growth of 13.2 per cent.

According to the Asian Productivity Organisation, China’s average level of labour productivity grew by 9.3 per cent per annum between 2005 to 2013, far higher than was the case in a number of alternative production bases in Asia – notably Vietnam (3.7 per cent), Indonesia (3.4 per cent) and Bangladesh (2.8 per cent).

Manufacturers in China also benefit from their access to well-developed industrial clusters, with upstream supplies easily sourced locally as well as the skills of its domestic labour force. With ample supply of both services and upstream and downstream products, manufacturers are assured of the provision of a strong supply chain, ensuring ready access to ancillary industries, products and spare parts. China’s competitive advantage in the more advanced industries will only become more pronounced as the country continues to invest in R&D and move up the production value chain.