"This is happening within the industry itself as brands try to engage the new consumer - and lure back the old. Fashion industry is certainly seems to be in a state of flux. The collapse of the Asian market, an exodus of designer talent from the big houses and the sluggish performance of ready-to-wear has precipitated several radical announcements."

This is happening within the industry itself as brands try to engage the new consumer - and lure back the old. Fashion industry is certainly seems to be in a state of flux. The collapse of the Asian market, an exodus of designer talent from the big houses and the sluggish performance of ready-to-wear has precipitated several radical announcements.

The slowdown has been profound. According to Philip Gajzer, managing director of Move Now Commercial Brokers, which advises luxury brands on property, footfall has dropped by around 20 per cent in recent months, and as much as 50 per cent in certain areas. An increase in first-quarter sales at luxury conglomerate Kering came in below expectations at 2.6 per cent, while earlier this month retailer Hugo Boss said it would cut costs by €50m this year after a 4 per cent fall in sales over the same period.

Beginning of the slowdown 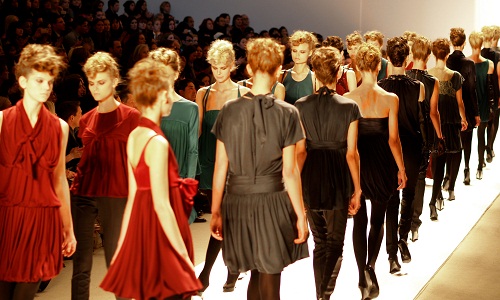 According to some fashion houses, this slump began with the global economic downturn in 2008 and sharpened in the wake of the Paris and Brussels attacks. A new system of Chinese import taxes introduced in April has contributed further to luxury’s woes. The Chinese, who account for one-third of all luxury purchases globally, are being more frugal.

Disruption is happening within the industry itself as brands try to engage the new consumer - and lure back the old. In February, British fashion house Burberry announced it would start selling collections directly from the catwalk from September - a ‘see now, buy now’ strategy. Commentators heralded the decision for subverting forever the traditional show format, where clothes are normally delivered in store six months after their catwalk appearance, and upsetting the sanctity of a twice-yearly show schedule that has existed for 50 years.

Burberry chief executive and creative director Christopher Bailey explained that it’s doing what feels right for our audience. It wasn’t supposed to be a ground shift within the industry. Or even that radical. But we’re in an industry which is supposed to embrace change and so this format felt like part of that journey, he said.

Tom Ford will shift his show to a see now, buy now model in September, while Prada, Michael Kors, Coach and Diane von Furstenberg all offered a small number of accessories and apparel for sale immediately after their autumn/winter presentations this spring.

Some are less enthusiastic. It’s a mess, said Karl Lagerfeld, also in February, of the decision by some brands to re-tailor the business of fashion. The creative head of Chanel, Fendi and his own brand acknowledged the capabilities some companies might have to deliver high volumes in shorter timeframes through direct distribution. But Lagerfeld said the system would be disastrous for smaller designers still dependent on wholesale to achieve sales. He echoed the sentiments of many when he said, ‘This way is chaos.’

In fact, ready-to-buy may be less disruptive than it seems. Our model of business is already ready-to-buy in that most of our sales are in the pre-collections, said Michael Burke, chief executive of Louis Vuitton. Only 5-10 per cent of store merchandise is presented on the runway. For us, the show is not about commercial product. It’s about being transgressive and remaining interesting, so that we have something to talk about.

Meanwhile, more disruptive are the plans to merge the men’s and women’s shows. Again, Burberry was among the first to announce such an approach. But the mixed catwalk was already well established, with Gucci, Prada and Saint Laurent among those experimenting. Gucci has made the shift permanent.

This gender blending is profound. First, it makes for an editorial nightmare, as fashion editors work out what should be covered, in which month, and where. For business, it makes some sense by showing women’s clothes on menswear catwalks, brands can use the earlier calendar dates to increase their in-store shelf life.

Incidentally, the women’s season is a source of frustration for designers who want to keep their product in store for longer before sales begin. Sales are the terror of our industry where a piece of fashion has a lifetime of four months, says Albert Kriemler of fashion house Akris, which has no plans to change its practice. The menswear dates would be much more reasonable to the industry in terms of delivery.

Meanwhile, discounting remains the scourge of the industry. Gucci has a plan - last December the Kering-owned company renounced the sale season, saying its products will simply hang alongside new season stock with no reduction. Likewise at Saint Laurent, which claimed the creation of the ‘permanent collection’ that is never discounted has contributed to the company breaking the $1bn revenue barrier last year.