Is reshoring fashion manufacturing in the US a viable option?

"Even if all goes as planned and textiles is able to lakhs of jobs to the US economy (without replacing them by machines), train enough people to fill these jobs, and employ them in an ethically sound, well-paying manner, what does that actually mean for the fashion market? With the emergence of extremely affordable fast fashion, let’s see how does ‘Made in US’ tag fare among the peer countries…"

Even if all goes as planned and textiles is able to lakhs of jobs to the US economy (without replacing them by machines), train enough people to fill these jobs, and employ them in an ethically sound, well-paying manner, what does that actually mean for the fashion market? With the emergence of extremely affordable fast fashion, let’s see how does ‘Made in US’ tag fare among the peer countries…

Are ‘Made In America’ Products affordable?

Walmart, as a part of its pledge to bring American jobs home has reached out to manufacturers willing to do just that, and given their scale they are poised to push suppliers on cost. It is evident that if manufacturers were to follow US labour laws that would not allow for truly cheap clothing and accessories to be manufactured here; certainly, fast fashion in its current form and with all its current offerings would not thrive as a law-abiding business in the US.- 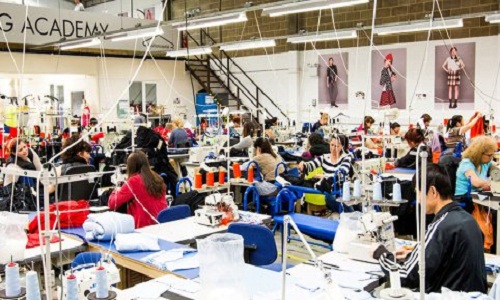 While many American manufacturers are making relatively low priced garments, these tend to be things like T-shirts that are mass produced with the help of machinery, and are a far cry from the trend-specific ware that fast fashion retailers are churning out on a regular basis. Speed to market doesn’t seem to be a problem for US manufacturers, but the hallmark of fast fashion is not just speed, it’s price, and fast fashion retailers’ prices are not ones that can be sustained with drastically increased manufacturing costs. aFor Bangladesh, a rising world power in garment manufacturing and the world’s second-leading apparel exporter, the minimum wage for the garment industry is set at $68 a month.

In 2010, the US Bureau of Labour Statistics reported that the average American family spends $1,700 on clothes annually, 3.5 per cent of their total expenses. While $1,700 will certainly go a long way in terms of shopping at Forever 21, that figure will generally allow for the purchase of far fewer American-made garments, especially if consumers desire something other than jeans and t-shirts.

In the battle between US and foreign made, it is easier to convince consumers to pay a premium for a technically complex and/or finely-made garment than to pay a premium for a basic garment that could easily be made more cheaply overseas. As a result, companies are being forced to focus their ‘Made in America’ efforts on higher quality goods that will justify higher prices, positioning ‘Made in America’ as a new niche in the luxury market.

Impact of a networked world

In this interconnected world, even if American companies focus on reshoring production and producing costly pieces, those who have been priced out of that market will easily find pieces they can afford elsewhere. Assuming that drastic legislative changes do not prohibit the entry of – or price out – foreign brands, we are in no real danger of undoing all of the work of democratising the fashion industry. Unless the cost of US production can be decreased substantially (perhaps through increased automation of the manufacturing process), this will add a new layer of elitism to the fashion industry.

On a positive note: there are higher transportation costs, longer lead times, more complex (and more difficult to navigate) supply chains, and the added level of uncertainty that arises when goods are being manufactured halfway around the world. In addition, while smaller and often newer companies tend to require smaller production runs, overseas manufacturers tend to mandate larger minimums in order to make a profit considering elements, such as transportation costs.

In that vein, local production proves an asset for some businesses. The proximity to factories allows for heightened oversight, faster turnaround, and serves to eliminate most transportation costs. This must be balanced with the fact that as businesses begin to grow, they tend to outgrow most domestic manufacturing operations. With this in mind, the new normal for US fashion manufacturing may very well be led by brands that can afford it – and that desire to bring manufacturing home – and/or by startups with strong financial backing.