"ITME- TIT conference “Paradigm Shift-What’s Next in Textiles” focused on the theme ‘Targeting Indian textiles and clothing business at $300 billion’ was successfully conducted as a day-long conference on December 6, at the recent ITME exhibition in Mumbai. Who’s who from the industry, academia and government offered their valuable insights to make India the next global textile hotspot. TIT (The Technological Institute of Textile & Science) Conference was organised by FashionatingWorld/ DFU Publications and co-organised by TAI Delhi"

ITME- TIT conference “Paradigm Shift-What’s Next in Textiles” focused on the theme ‘Targeting Indian textiles and clothing business at $300 billion’ was successfully conducted as a day-long conference on December 6, at the recent ITME exhibition in Mumbai. Who’s who from the industry, academia and government offered their valuable insights to make India the next global textile hotspot. TIT (The Technological Institute of Textile & Science) Conference was organised by FashionatingWorld/ DFU Publications and co-organised by TAI Delhi 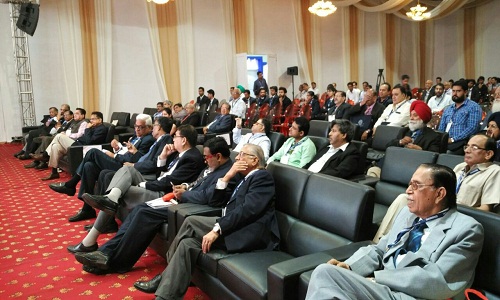 Chief guest Textile Commissioner Dr Kavita Gupta, in her keynote address, spoke about the schemes and  campaigns run by the Centre to make India an attractive destination for textiles. “Though spinning industry is performing extremely well in India as compared to other sectors, although we don’t have incentives for spinning. Garmenting and technical textiles have a subsidy of 15 per cent, weaving and composite have subsidies of 10 per cent. Indigenous textile machinery only has 40 per cent share to the total demand, in this area we need to promote joint ventures. There is a pressing need for advanced machinery setups to be a competitive country in the global textile sector.” Elaborating further, she added, in garments, we have got additional 10 per cent subsidy that makes for 25 per cent subsidy in total. We need to do a lot of R&D in the textile sector as well as textile machinery sector. We understand the need to upgrade the industry, bring in more technology and that’s why we have incentives, capacities can be raised only by joint ventures and tie- ups. She also asserted that the government is providing assistance not only in the form of capital investments but other areas as well, it has decided to pay for the entire EPFO.

R D Udeshi, President (Polyester value Chain), Reliance Industries, spoke largely on the challenges facing the textile industry. He said, “We are living in a volatile, uncertain, complex world with a lot of ambiguities. We have an ambitious target of $600 billion by 2024-25, now we are talking about how to reach $300 billion target, it is always easy to make projections but implementation is never a piece of cake.” Udeshi said globally, textile is fairing much better than other commodities or sectors. In India, there is a change in the pattern of textile industry; we have demographical advantages, with the youngest population in the world. Still countries like Cambodia and Vietnam are growing faster than us, despite the fact we are rich in resources. “We have a good refining capacity unlike China, all we need is to utilize it, add value in it rather than exporting it, the export of raw material should be replaced by end product,” he added.

Prashant Agarwal, JMD, Wazir Advisors, emphasised not to focus on statistics rather maintain excellence in what we already have in place. “We should start working to achieve these growth numbers, there are a lot of areas to work on, moving from $120 to $300 billion means adding $180 billion is a herculean task. Today, global trade is about $7 75 billion, which will be somewhere around 1.25 trillion by 2025. We are growing by 8 per cent CAGR for the last few years; we are talking about 10 per cent of the total trade, so this is undoubtedly doable. The key lies in implementation,” he pointed out. 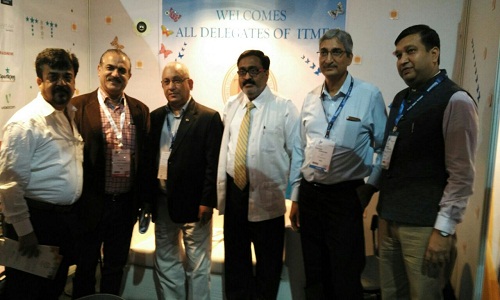 The second session was addressed by Subhash Bhargva, MD, Colorant Limited. He said global textile trade has  fallen from $827 billion to $776 billion during 2014-15. But in this fall again, India has been able to grow from $37 billion to $40 billion. It is heartening that India has maintained its share in this downfall, this shows our competitiveness. Similarly, exports have risen by six per cent to the US, 32 per cent to UAE and seven per cent to Canada. Over all in value terms, it is total four per cent.

The third session saw, Peter Golden, Head (Product Development), Saurer speaking on technology and the challenges that global textile industry is facing currently. “We believe that the major challenge in the textile sector is labour – skilled and unskilled both. There are concerns pertaining to environment. The need of the hour is to provide the right product, our focus should be on productivity, efficiency, and consumer’s profitability,” he said.

A session on sustainability, ‘Sustainability, the only way forward’ was also a part of the event where prominent industry speakers shared their views. One of the presentations were attended by N N Mahapatra, President, Colorant Limited. “There is a lot of buzz around sustainability. We, at Colorant, focus on sustainability and keep introducing technologies that save the environment in the long run,” he said. Dr B K Behera, HOD Textiles, IIT, spoke extensively on technical textiles, its importance for India, and highlighted the innovations they are doing in this area. Sandip Arora, CEO, Polyspin India that has a joint venture with Eksoy, a multinational company in chemicals from Turkey, spoke about how Eksoy is offering solutions to save environment by replacing urea, less usage of water and energy. Ajay Sardana, Chief Sustainability Officer, Grasim spoke about sustainability efforts taken up by the group. For them, it is simply a business case scenario rather than a charity as considered by many.

The last session was on Technical Textiles presented by VDMA, a German federations of industries. Their members from various technical textile sectors made insightful presentations.

All in all, the conference offered insightful experience of industry stalwarts and gave the audience a lead to take the growth trajectory ahead.