The House of Dormeuil known for sourcing and selling rare and precious fibres from around the world is making a mark in India. Its collection of pure wool suiting in basic counts, pure cashmere suiting, super 180 and super 230 stand out because of their quality. “The Indian market is becoming stronger every year. We have big sales during weddings and are growing at 10 to 25 per cent per annum in the country,” explains Richard Boide, Commercial Director, Dormeuil. A top supplier of luxury fabrics in India their prices range from Rs 10,000 a metre up to Rs 2,00,000 a metre.

The company has 60 to 70 retailers in India. Because of the nature of the product and 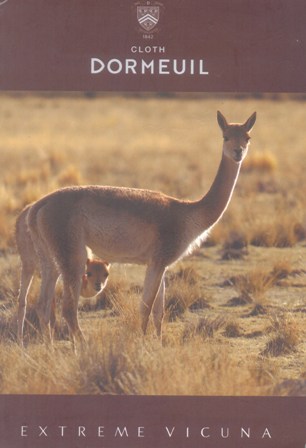 the climate the biggest markets are Delhi and north India. However, Mumbai is fast emerging as a strong market.  “We work with some designers in Mumbai,” says Boide. In some countries it also works with suit manufacturers. “We have a big business in Japan for suit manufacturing and this will be one of the strategies for growth in India as well,” Boide explains.

Its latest search is the native vicuna. The protected animal is treated with great care and respect during the shearing process, which takes no more than 10 minutes. Each animal is only sheared once in two years. Each vicuna provides approximately 300 grams of wool.

Taking its quest forward, Dormeuil has also used Argentinean fibres. Extremely rare, pale and difficult to weave, the exclusive raw material gives this Extreme Vicuna Collection its supremacy. The fibres are extremely fine, at just 12 microns in diameter which makes it seem as if a breath of wind could blow it away. A carefully controlled production process, from shearing to weaving and finishing ensures the traceability of this precious material.

Vicuna wool fibres have an unmatched brightness which is the secret of their beauty and lustre. These qualities have allowed Dormeuil’s master weavers to create cloth of rare colour and brilliance from the world’s finest wool. The new palette of ten colours features several unexpected choices, including beige, light grey and plum, which recall views of the South American mountains. In addition to the surprising colour range achieved, vicuna wool allows scope for genuine technical virtuosity. The focus on discovery has been maintained throughout the generations and the quest for the rare and precious is woven into Dormeuil’s history and into its fabrics.

Set up two years ago, Dormeuil India is based in Delhi. It is one of the first European companies to export its fabric. It has a strong English association. “We were distributing in India even before 1947. Now we have a network of retailers across the country with high end customers. We have our own production facility in England and deliver anywhere in the world within 48 hours,” Boide sums up.