Besides, more than 5.3 lakh persons trained in last two years under Integrated Skill Development Scheme, out of which 81 per cent have been placed including 79 per cent of the trained women. 19 new Textile Parks have been sanctioned over last two years with potential to facilitate investment up to Rs 300 crores and employment to 60,000 people. 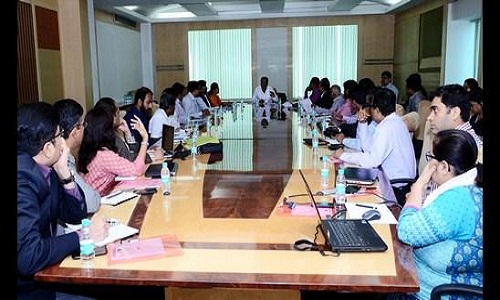 Eight Apparel and Garment making Centers have been set up in all NER States and Sikkim for promoting garment manufacturing in NER. The government has successfully launched Indian Handloom Brand for providing brand value to handloom products. It also launched Indian Handloom Website as a one stop platform for all services to consumers, bulk buyers and handloom producers.

In order to increase production of raw materials in the country, various policy initiatives and schemes are being implemented. The Cotton Development Programme focuses on cropping system approach under National Food Security Mission (NFSM) in 15 major cotton growing states with an aim to increase production & productivity. Government announces Minimum Support Price (MSP) to protect the interest of cotton and jute farmers to avoid distress sales.

Special Package for sector a booster

Nearly one crore new jobs, $30 billion in exports and investment worth Rs 74,000 crores within a period of three years was achieved on account of a special package of measures announced by the Ministry of Textiles to support the apparel sector and enable it to improve its global competitiveness.

A Special Package of Rs 6,000 crores was announced for garmenting sector with the aim of creating one crore jobs in next three years and to attract investment worth US $ 11 billion. As per the new package, overtime hours for workers shouldn’t exceed 8 hours per week in line with ILO norms. Considering the seasonal nature of the industry, fixed term employment needs to be introduced for the garment sector. The subsidy provided to garmenting units, under Amended-TUFS, has been increased from 15 per cent to 25 per cent.

Providing production incentive through enhanced Technology Upgradation Fund Scheme (TUFS) subsidy of additional 10 per cent for Made-ups, similar to what is provided to garments, based on additional production and employment after a period of 3 years and extension of Pradhan Mantri Paridhan Rozgar Protsahan Yojana (PMPRPY) Scheme (for apparel) to made-ups sector for providing additional 3.67 per cent share of Employer's contribution in addition to 8.33 per cent already covered under Pradhan Mantri Rozgar Protsahan Yojana (PMRPY).

To meet the needs of the industry for a skilled workforce and thereby support its competitiveness, the Integrated Skill Development Scheme has so far imparted training to a total of 8.49 lakh people, out of which 7.50 lakh have been assessed and 5.79 lakh placed.

Tirupur is a hub of the textile processing and knitting industry providing employment to over five lakh people, contributing 22 per cent of India’s total garment exports. Owing to its crucial importance, the Centre has sanctioned 200 crores for Tirupur’s dyeing industry that was on the verge of closure due to severe financial crisis after making huge investments in the country’s first Zero Liquid Discharge projects for effluents.

On Textiles Ministry’s recommendation, the Finance Ministry sanctioned funds for Tamil Nadu for 18 common effluent treatment plants set up at a cost of Rs 1,013 crores. The Rs 200 crores assistance is in the form of an interest free loan to be converted into grant, based on the performance of these plants. “This will help ailing CETPs and 450 dyeing units to recover from the financial crisis and help them to a complete the project to achieve 100 per cent capacity utilization,” the Textile Ministry said in a statement.