"With close to 350 million people working in the cotton industry, more than the entire US population of 318 million people, cotton industry is vast and growing. It directly employs 100 million households in cotton production, having 90 per cent share in developing countries. In 2013, 25.8 million tons of cotton lint were produced. Cotton is grown in more than 100 countries on 2.5 per cent of the world's arable land, making it one of the most significant crops in terms of land use after food grains and soybeans."

With close to 350 million people working in the cotton industry, more than the entire US population of 318 million people, cotton industry is vast and growing. It directly employs 100 million households in cotton production, having 90 per cent share in developing countries. In 2013, 25.8 million tons of cotton lint were produced. Cotton is grown in more than 100 countries on 2.5 per cent of the world's arable land, making it one of the most significant crops in terms of land use after food grains and soybeans.

The advent of cheap, disposable fashion ‘fast fashion’ has led to increasing demand for cotton and greater competition in the market. Real cotton prices, taking inflation into account, have fallen from $3.00/kg in the 1960s to $1.73 in 2014. In the US, the cotton industry is subsidised, so that farmers are able to weather the reduction in prices than growers who only receive market prices. 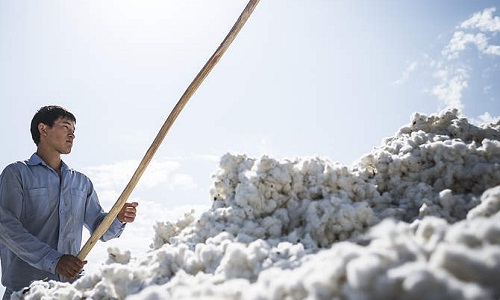 To make that favourite T-shirt, it takes about 2,720 litre of water, which is about the size of a large suburban rainwater tank. Artificial irrigation is used for much of the land, which leads to salinisation and depletion of local water supplies. The drying up of 90 per cent of the Aral Sea in Central Asia is a devastating example of the effect of artificial irrigation for cotton production.

Conventional cotton production also involves the large-scale use of chemical herbicides and pesticides to control weeds and pests. These pollute the environment and impact the land's productive capacity, which makes it harder for people to grow food, and can also cause serious health impacts. It is staggering to learn that half of the $2 billion of chemical pesticides used each year are classified as hazardous by the World Health Organization.

With an intent to enhance yields and incomes, farmers have been shifting to genetically-modified (GM) cotton. For instance, in 2012, close to 81 per cent of cotton planted was GM. However, the use of GM cotton seeds forces farmers into buying expensive seeds and pesticides each year from multinational companies. In India, over 270,000 Indian farmers committed suicide between 1995 and 2014 after becoming victims of banks to fund the increasing costs of pesticides and GM cotton seeds.

There is a human rights aspect to the story as well. Till recently, school children in Uzbekistan were forced to pick cotton to meet government-imposed quotas. After sustained pressure from local and international organisations and foreign governments, Uzbekistan changed its forced labour policies in 2012 to no longer mobilise children younger than 16 on a mass scale. While the reduction in child labour is a positive outcome, it did not represent an end to forced labour in its entirety. But the entire exercise has seen an increase in the number of adults forced to work the cotton harvest to compensate, including teachers, doctors and nurses.

The biggest reason as to why these countries are still employing such practices is because in clothing labels, you will not find details about origin of sourcing materials, it will only have the country where the garment is produced. The Environmental Justice Foundation highlights that cotton has historically proved difficult to trace both because it is traded as an international commodity, and because the supply chain itself is long and complex, typically having 6/7 players from fibre to retail.

The above facts point towards unsustainable expanse of conventional cotton production, yet they don’t suggest a shift to alternative fabrics, which have their own inherent problems. Polyester is a synthetic material made from petrochemicals and is non-biodegradable. Bamboo fabric is generally made by converting raw bamboo into a rayon or viscose with hazardous chemicals, which endanger the safety of workers and degrade the environment with waste.

Where cotton is produced with a focus on social and environmental sustainability, it remains a good choice as a clothing fabric. Today, many organisations are taking steps to build a more sustainable cotton industry. In the light of this, many farmers have resorted to organic cotton production. Unlike conventional cotton, the organic variety does not involve the use of synthetic pesticides. Natural pesticides are used in some circumstances, but the focus is more on better farming practices including crop rotation, crop diversification, and choosing varieties suited to local conditions.

The Global Organic Textile Standard (GOTS) is a standard for organic certification and includes environmental and social responsibility requirements including a prohibition on certain chemicals, a requirement for safe and hygienic working conditions, the payment of a living wage, and a prohibition on child labour. It covers the entire textile supply chain (processing, manufacturing, packaging, labelling, trading, distribution), and gives consumers reassurance that clothes carrying the GOTS label have been produced in the eco-friendliest and socially responsible manner.

Fairtrade also has a certification scheme for cotton. The focus of Fairtrade cotton is to tackle poverty and empower producers and workers to take control over their lives and the decisions that affect them. It does so by supporting certified farmers with fairer, more stable prices. Additional income is also used to invest in infrastructure, training, farm equipment and business improvements, as well as programmes such as healthcare, clean water and education. Fairtrade certification for cotton also requires minimised use and safe handling and storage of pesticides, herbicides and hazardous chemicals, and a prohibition on forced labour.

Another noteworthy initiative is the World-Wide Fund for Nature's Better Cotton Initiative, a standard for improving sustainability in cotton production in terms of environmental, social and economic responsibility. The Environmental Justice Foundation also helps retailers investigate the supply chain in their cotton products, to help them eliminate human rights or environmental abuses.

Ultimately, the choice lies with us to embrace these positive changes and guide our purchases so that cotton can continue to survive as an industry and as the preferred raw material for fabric manufacturing.