Already, for the last few years, supply chain was shifting away from China to countries like Vietnam, Bangladesh, India, and Mexico. However, the outbreak of COVID-19 has accelerated this process despite China being on a road to recovery.

Though China has the best infrastructure in the world to support large manufacturing businesses, the current crisis along with the end of quota system, development of new capabilities and evolving sustainability issues, is forcing retailers to carefully review all factors before moving from an established, trusted entity.

Exports from China on the decline

A survey by CGS (Computer Generated Solutions) reveals China, being one of the largest producers of soft goods, exports around, 30.75 per cent to the US. However, for the 12-months ending in October 2019, the country’s exports declined by 5.6 per cent to $22.13 billion. However, it was still expected that China would produce a major share of goods bound for the US. Now, the outbreak has crushed this hope. Though the full effect of Coronavirus is yet to be measured, reports suggest productivity has not yet reached anywhere near capacity. Covid-19 has abated to a point where some stores are being compelled to reopen at new locations.

Though China was traditionally known to have cheap labor, it is no longer the case. Now, it has become very efficient. In fact shipping time from Shanghai 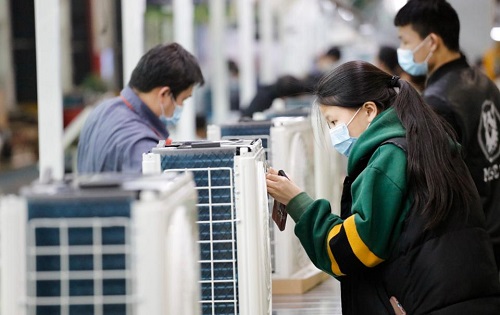 to Los Angeles is 23 to 31 days; shorter than from any other country except Mexico.

The second largest garment exporter after China, Bangladesh produces apparels for some of the biggest retailers in the world. Its garment manufacturing activity accounts for 80 per cent of the country’s export earnings. For the period ended October 2019, the country shipped apparels worth $5.1 billion to the United States, an increase of 10 per cent from previous year. Footwear imports increased a whopping 32.6 per cent during the same period. The country has revamped its logistics facilities, and increased wages in 2019 besides putting most garment workers under one digital wage system.

Vietnam’s apparels exports to the United States in the period ended October 2019 increased 10.9 per cent. Caused by an increase in wages the value of its exports also increased about $11.7 billion. The CGS report reveals the country received an influx of investment during this period and currently enjoys the benefits of the Comprehensive and Progressive Agreement for Trans-Pacific Partnership, an agreement which gives partner nations duty-free access to Vietnam made goods. Since the country is closer to China in location, it is easy for companies to transfer production there. Many Chinese apparel companies have built their factories, mills, and wholesale supply chains in the country. This enhances Vietnam’s reputation as a production site. However, its growing trade deficit may elicit tariffs.

India’s exports to the US during the period ended October 2019 increased by 6.9 per cent to $3.6 billion. Of this footwear exports increased 5.4 per cent. To improve its exports further, India is building its vertical resources. It has so far approved 74 textile parks, 18 these are operational, and 32 are under development. The government is inspecting thousands of factories. In Spring 2019, the United States changed India’s designation as a beneficiary developing country under the Generalized System of Preference program.

Apparel exports from Mexico to the US declined 5.6 per cent in the first 10 months of 2019. However, its exports of denim products increased by 2.9 per cent to $690.4 million. Though a new United States, Mexico, Canada Agreement was signed it is likely to boost exports from Mexico, the uncertainty over implementation of the agreement has forced companies to balance risk and opportunities. The country also faces labor rights issues which could be disruptive. In addition, the government raised minimum wage by 20 per cent on January 2020. Its footwear exports fell by 13.2 per cent in the first 10 months of 2019.

While companies have diverted their shifting from China, they are yet to decide on the destination for sourcing. Retailers are also seeking options outside China to produce apparel. However, other countries lack the operational sophistication that China has.

China’s recovery from Coronavirus is likely to be slow and painful. However, US retailers cannot wait. They have to place orders for Christmas 2020. For this, they need to divert their production to nearby countries. COVID-19 has added uncertainty to their near-term plans and urgency to accelerate their shift in production.