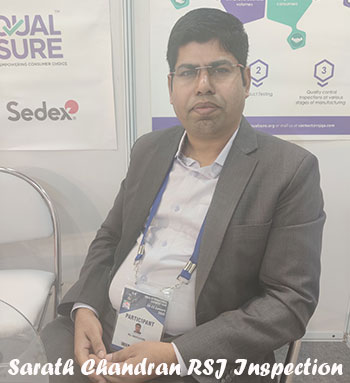 An independent third party inspection service company, RSJ Inspection works as a quality control partner for securing Indian imports. The company was recently accredited as the rating agency for the zero defect initiative (ZED) launched by the Indian government. Sarath Chandran, Director of the company elaborates on this initiative.

The Zero Defect Initiative supports the Make in India Campaign. “Though this campaign took off well, it later faced problems,” says Sarath Chandran, Director of the company.  “Therefore, we started these, zero defect and zero effect initiatives. Over 50 countries have signed MoUs to use this standard in their countries,” he adds.

The aim of this initiative is to enhance global competitiveness of India’s MSME countries.  “Before its inputs being used, the initiative was tested with several companies. Any Indian MSME can apply for this initiative free of cost. It can go to the website, register and get itself assessed free of cost,” avers Chandran.

The 50 parameters of this initiative suit all manufacturers and help them to go to the next level. These parameters include finance, people management, property, environment, safety, intellectual property rights. In finance, one of the parameters is turnover growth; another is profit. “If a company manages to achieve a particular turnover it’s known as a world class company. If it reaches a normal level it is at level 3. Any company that aims to reach these benchmark figures on its own has to spend heavily. However, this is a readymade package that aims to transform the quality of culture in India,” states Chandran.

When the scheme was launched, the target was to reach 22,000 manufacturers.  However, response to it was poor despite awareness seminars being held across India. The scheme mostly benefitted associations, clusters and some original equipment manufacturers in automobiles. However, the application of this scheme in Apparel and Textile (T&C) is still low as awareness is low.

The concept of zero defect sounds scary to some people. “However, it is a good target to achieve.  Its intention is to give incentives to certified factories. The scheme operates through a few banks. In Himachal Pradesh or Punjab, if you get a Z certification, you can avail of MSME benefits like electricity subsidy within three years,” affirms Chandran.

Currently only two companies in the textile and apparel sector have been certified. Of this, one is in Ludhiana, another is in Delhi NCR. There is also a leather company in Chennai.

Once a company receives this certification, it may want to reach the next level. “For this, it can get five- day training and, qualified consultants.  A Z-certified company is one to which orders can readily be given,” notes Chandran. The scheme benefits export promotion councils of India.