"A recent survey by McKinsey & Company reveals around 60 per cent of all clothes produced end up in incinerators or landfills within the first 12 months. People are buying new clothes in large quantities. Clothes production doubled between 2000 and 2014, with the number of garments purchased each year by average consumer increasing 60 per cent." 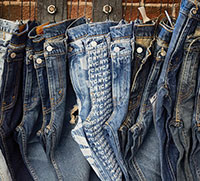 A recent survey by McKinsey & Company reveals around 60 per cent of all clothes produced end up in incinerators or landfills within the first 12 months. People are buying new clothes in large quantities. Clothes production doubled between 2000 and 2014, with the number of garments purchased each year by average consumer increasing 60 per cent.

Though many brands adopt sustainability measures in their operations, their focus is often misleading as they emphasise on a single sustainable component like the recycled ocean plastic. However, Levi’s has opted for a complete redesign of systems. Aware that fabrics recycled from reclaimed bottle can’t be recycled alongwith its snaps or zippers, the brand aimed to create something better than that is available.

It launched a new range of garments designed with 100 percent cotton Thermadapt fabric. These garments are 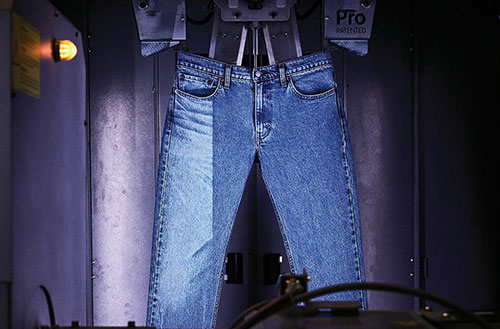 made from a polyester thread wrapped in cotton. This thread is then woven into denim and further dissolved and recaptured for future use. The resulting fabric looks like a heavyweight jean but is 30 percent lighter than traditional denim; it also wicks moisture from the body and provides enough insulation for year-round wear.

The machines that produce these garments aren’t located in San Francisco. However, Eureka Innovation Lab houses an array of scientific instruments for testing fabric and a room full of hi-tech wash and dye machines.

Rather than creating a new manufacturing system, Levi’s wanted to process hemp that would make it feel and act like cotton. This led to the development of cottonised hemp, produced using little energy or chemical processing and could move through a supply chain similarly to cotton.

The brand recently introduced Wellthread cottonised hemp collection as its team learned how to process, spin and weave the thread. In upcoming seasons, the brand will incorporate this cottonised hemp into its indigo denim and finish it with a range of washes.

The belief that people should buy less is an odd position to hold as one of the most influential executives at the world’s largest denim brand. However, Levi’s Wellthread x Jacquard by Google jacket, endorses this view of the brand. The jacket, featuring a touch interface on the left wrist paired to the wearer’s phone, allows the consumer an on-the-go access to navigation, messaging, music, etc. This stops the consumers from throwing away the jackets after a few uses. The brand also upgrades the jacket’s digital functionality with new features by adding and monetising digital value rather than simply producing more stuff.

Though Levi’s experiments with new and emerging technologies — e.g., working with textile technology startup EvrNuto produce jeans from garment waste, or using bacterium to dye clothes the right shade of blue — the brand adopts a simple, humanistic approach to attack the thoughtless consumption cycle. The brand emphasizes on making clothes that last. It also aims to train people to value clothes that they already own. Repair and reuse them instead of throwing them away.

Exhibitors and newcomers, including the suppliers from Belarus, are set to show off their latest innovations to meet the specific... Read more

"Viewed as both an opportunity and threat, digital transformation enables manufacturers to save time and costs by enabling them to... Read more

If spring/summer 2020 runways are to go by, trendy tights have caught the attention of many designers across the globe.... Read more