Chinese lingerie brands like Ubras, Candy La Vie and Sujiin are building their businesses in the domestic market by offering an inclusive size range.

China has always had people of diverse body sizes. As per a Women’s Wear Daily report, the country has 56 officially recognized ethnicities. There are also significant differences between northern Han and southern Han, the dominant ethnic group — which comprises women with larger busts.

According to research released from the medical journal The Lancet last November, China’s population is becoming increasingly overweight or obese. In 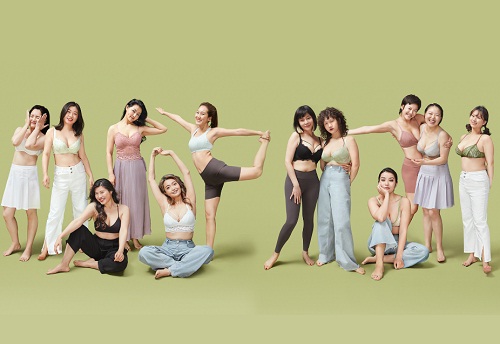 1985, an average 19-year-old female in China was 5 foot 2 inches tall, while males were 5 foot 5 inches. In 2019, those numbers grew to 5 foot 4 inches for women and 5 foot 8 inches for men, with the increase in men’s height clocking the largest gains in the world.

One of China’s top selling lingerie brands, Beijing-headquartered Ubras is an advocate for the one-size-fits-all bra idea in China. The brand offers a seamless collection of bras that are made from lightweight fabrics and do not have an underwire. These bras are suitable for all types of activities like sleeping, lounging, working out, traveling, being at the office, and pregnancy. The product also allies with the company’s digital-first model.

For all sizes and preferences

Similarly, Neiwai launched its Barely Zero collection featuring soft and highly stretchable bras that fit women up to D-plus cup. Another digital start-up Sujin offers bras that fit a DD cup and are available in all skin colors.

A startup dedicated to plus-size women, Candy La Vie is engaged in educating customers on the difference between large cup sizes and large band-size. Zhang Chengpu, Co-Founder and Creative Director, says, though the band sizes of Chinese women may be smaller, but many of them still require large cups as they have a large chest.

An influencer known for her curvy figure, Yang Tianzhen collaborated with Victoria’s Secret in May for campaign on body positivity. She also has her own plus-size clothing line, PlusMall that offers plus-size lingerie in bright colors.