Cotton prices witness a rebound on cues from USDA report

Global cotton prices have fallen over the past months however, NY Futures sharply reversed after the release of this month's USDA report. Prices for the most actively traded December futures declined slowly but steadily throughout the month of July. In August, prices broke out of the range between 63 and 68 cents/lb for the first time since mid-March by falling through support near 63 cents/lb. However, following the release of this month's USDA report, which featured large downward revisions to figures for US production and ending stocks in 2015/16, prices rebounded from levels near 62 cents/lb back to those near 65 cents/lb. 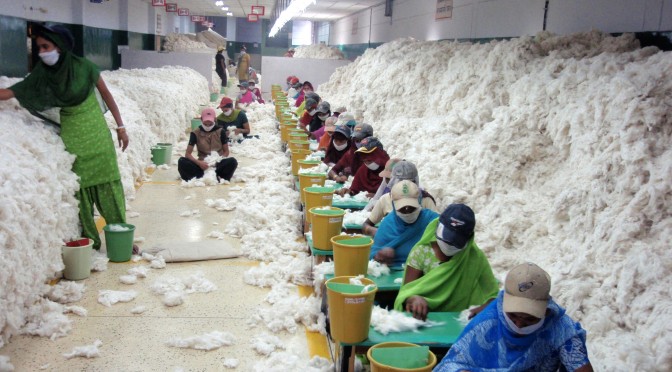 The A Index followed NY futures lower throughout July and August and dropped to values below 70 cents/lb for the first time since April. The Chinese government facilitated the largest percentage decrease in the value of the RMB relative to the US dollar since 1994 early this week. The shift in the exchange rate lowered the value of the CC Index in dollar terms slightly from 96 to 93 cents/lb. In local terms, the CC Index has been steady at values near 13,150 RMB/ton.

Indian spot prices for the Shankar-6 variety moved marginally lower over the past month. In international terms, values declined from 69 to 67 cents/lb. In local terms, prices declined from Rs 34,400 and Rs 33,700 per candy. Pakistani spot prices also decreased slightly. In international terms, values fell from 56 cents/lb to 53 cents/lb. In local terms, prices decreased from Pakistani Rs 4,700 to 4,500 per maund.

The response by NY futures to the latest USDA release was likely driven by the substantial changes made to figures related to the US. It is not uncommon for there to be large revisions to US production estimates in reports released in August. This is because there is a change in methodology used by the USDA between the July and August releases.

From May, when the first complete estimates for upcoming crop year are released, to July, the USDA relies on commodity analysts and statisticians to develop forecasts. In August, and throughout the harvest period, data gathered from field surveys conducted by observers across the cotton belt are used to generate yield and production forecasts. This year, due to heavy rainfall in many cotton growing states, there was considerable uncertainty related to acreage planted, abandonment, and yield. As a result, the change in methods could have been expected to result in important revisions to existing estimates.

This month, the US planted acreage number was lowered 100,000 acres nationally from 9 to 8.9 million. Abandonment, which refers to acreage planted but not harvested due to poor crop conditions, was increased from 500,000 acres to 1.0 million acres. The national yield forecast was lowered 27 lbs/acre (3 per cent). In combination, these changes generated the 1.4 million bale (10 per cent) decrease in US harvest expectations this month.