Though the pandemic affected the entire fashion sector, its impact on workers was massive. Halting of thousands in-progress or finished order by retailers led to revenues worth $22billion being stuck with brands, says Scott Nova, Executive Director, Workers Rights Consortium, a labor rights advocacy group. This resulted in layoffs and reducing payroll costs in many suppliers’ factories, says a Vox report.

Even workers having full-time employment suffered. As a Clean Clothes Campaign report published in August shows, garment workers across the world failed to receive wages worth $3.19 billion and $5.79 billion in March, April, and May due to COVID-19 cutbacks, while workers in South and Southeast Asia received 38 per cent less pay than usual during those three months.

Almost 29 of the 50 apparel brands surveyed by the Business & Human Rights Resource Centre recorded profits during the pandemic. Yet, nine of them 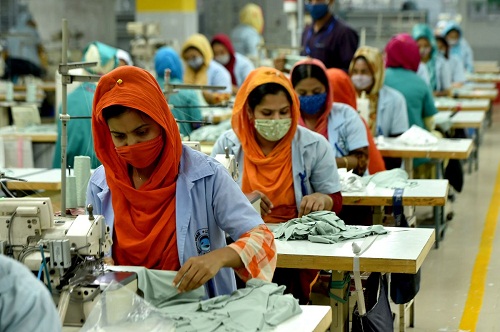 have still not committed to pay for suspended or canceled orders. As Thulsi Narayanasamy, Leader-Senior Labor Rights, BHRRC says, brands are driving prices down further than they were before the pandemics. Retailers are also squeezing margins in subtler ways.

Also, brands are placing 30 per cent lesser orders than they usually do this time of year, says BGMEA in a survey of 50 factories. This has led to governments of many South East Asian nations urging brands to establish a wage assurance fund to ensure all workers receive their dues in accordance with labor laws and international standards. Nonprofit organization Remake has initiated the #ShareYourProfits campaign that urges 12 top-performing brands — Adidas, Amazon, Asos, Gap, H&M, Levi Strauss, Lululemon, Primark, Under Armour, Uniqlo owner Fast Retailing, Nike, and Inditex — to donate 1 per cent of their net revenue for garment worker relief.

Brands like H&M are donating funds worth billions of dollars to nonprofits including Save the Children and WaterAid. This will help brands provide emergency relief to 76,000 Bangladeshi women and their families. Workers’ rights groups including the Asia Floor Wage Alliance, the Clean Clothes Campaign, and the Worker-Driven Social Responsibility Network plan to sign an agreement to make brands legally liable to pay an additional living wage contribution on every order they place with their suppliers.

There are signs of the industry changing. Earlier this year, nine trade organizations from Bangladesh, Cambodia, China, Myanmar, Pakistan, and Vietnam came together to create the Sustainable Textile of the Asian Region to negotiate better purchasing practices with brands. This initiative is likely to be adopted by other countries.

Though fashion companies often argue they don’t own these factories they source from, many of them have offices based in the countries they produce in. They share a close relation with these suppliers and hence, can determine the fate of these workers.

Denimazing shows the way as a virtual marketplace for denim companies

From production of basic wear, the Bangladesh and garment industry is fast transforming into a manufacturer of sophisticated garments aided... Read more

COVID 19: An opportunity for luxury brands to create stronger value

The pandemic has brought profound challenges for the global luxury goods industry. As per a Bain & Company report, luxury... Read more

Nearly all governments across the world have announced fiscal stimulus packages for their economies to recover from the effects of... Read more

The 7th ITMF Corona Survey brings some cheer to the textile industry. The survey reveals the turnover of global textile... Read more

As against the entire world, COVID-19 has proved to be a blessing in disguise for the Pakistan textile sector. The... Read more