"The 32nd International Apparel Federation (IAF) convention in Mumbai took off yesterday with a welcome address by Rahul Mehta, IAF president and president of the Clothing Manufacturers’ Association of India (CMAI). In his welcome speech, Mehta spoke about the huge potential India has to increase its market share in global apparel trade. He spoke about how China has gradually reduced its focus on labour intensive industries including textiles and apparel throwing up huge opportunities for countries like India."

The 32nd International Apparel Federation (IAF) convention in Mumbai took off yesterday with a welcome address by Rahul Mehta, IAF president and president of the Clothing Manufacturers’ Association of India (CMAI). In his welcome speech, Mehta spoke about the huge potential India has to increase its market share in global apparel trade. He spoke about how China has gradually reduced its focus on labour intensive industries including textiles and apparel throwing up huge opportunities for countries like India. 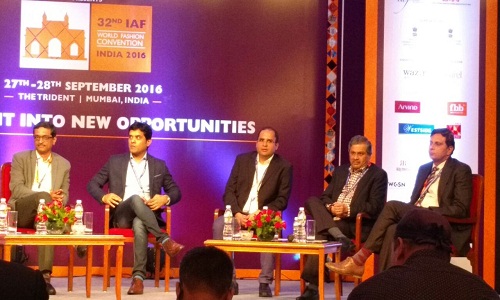 And as part of consolidating its relationship further with the Chinese industry, Clothing Manufacturers ‘Association of India (CMAI) signed a Memorandum of Understanding (MoU) with China Chamber of Commerce for Import and Export of Textiles (CCCT) for extending co-operation with each other in new business and exchange of trade and data related co-operation for mutual benefit. The MoU was signed by Rahul Mehta, for CMAI and Jiang Hui Chairman, CCCT.

This MoU is expected to benefit both countries apparel sector in the long run. The two parties CMAI and CCCT look forward to promoting their mutual interests in expanding economics and trading relations. With this MoU, they could pursue the goal of promoting and expanding communication in the areas of promotion of trade and investment cooperation, exchange of ideas for developing the sector, promote participation in trade fairs being organised by either, support business partnership search for members as a match maker, trade delegations and training etc. As Mehta points out, “While organizing trade fairs, both of us would co-operate in associating new clients, visitors and associated supply chain participants to the forum for the benefit of the apparel trade.” Mehta adds “Among other objectives of this cooperation, we feel we may be able to sell our garments in China, as the cost of manufacturing is becoming expensive in there.”

Hui adds "This comes as a framework to regulate mutual cooperation and work to promote apparel business in our countries. We also look forward to importing more raw materials from India among other objectives. However, we don't see import of readymade garments going up significantly, as China for high end garments will continue to manufacture within the country and for low end, low priced garments we have arrangement with ASEAN countries.”

The opening session was followed by a detailed presentation on India’s textiles industry its future potential by Wazir Advisors. In his keynote address on India-EU Trade Relations: Future Perspectives. Francesco Marchi, Director General, Euratex said “The Indian government should start negotiations for the Free Trade Agreement with the European Union (EU) and the United Kingdom (UK) for the benefit of the Indian apparel sector. It is hard to imagine the success of the FTA without UK, post Brexit. UK continues to be textiles manufacturing hub contributing 29 per cent of the entire apparel trade in the EU. 22 per cent of India’s exports to the EU go through UK.”

Experts forecast India’s textiles industry will double in five years from the current $110 billion ($68 billion domestic and $42 billion exports) to $220 billion by 2021. Speaking on the occasion, Managing Director and CEO of Mafatlal Industries, Aniruddha Deshmukh said e-retailing was going to be the next growth opportunities in the Indian textiles and apparel sector in the next few years. Since metros are overcrowded with retailers with high overheads, there would be more retail business opportunities in Tier II, III cities. Companies have better opportunity of expansion though franchise route.

The two day IAF convention being held in Mumbai started yesterday. It is seeing the participation of 250 Indian brands and manufacturers and industry representatives from about 20 countries. Top industry stalwarts and biggest brands, companies and people associated with the apparel industry from across the globe are attending.

The theme of the convention ‘Insights into new opportunities’ was very clearly carried forward by all four sessions on day 1, with topics ranging from sourcing and supply chain management, to trade policy and from retailing in India to technology. The sessions highlighted free trade agreement between India and the EU, lower costs through better cooperation between buyers and suppliers, opportunities in countries in Africa and in Russia, the dizzying growth of the market in India and the disruptive power offered by robotics and computing technologies. Harminder Sahni, MD, Wazir Advisors, Knowledge Partners for the convention, while presenting the theme of the convention said, “World must see opportunities in the growing fashion business from $1.7 trillion in 2015 to $2.6 trillion by 2025.” He added, “The key growth drivers should be looked as: emerging economies, increasing consumption and innovations. But the opportunities are worth the challenges being faced. Expectations from suppliers are rising in sustainability, innovations, agility and price and quality.”