ICRA has noted that exports of cotton yarn are under pressure due to lower demand from China, said to be the largest importer of yarn from India. Moreover high cotton prices due to low arrivals are set to hit spinners.

Jayanta Roy, Senior Vice-President and Group Head, ICRA revealed that the fall in export demand for cotton yarn was a major challenge for spinners as the industry has been exporting a third of yarn produced for the last four years. With the fall in demand, spinners have to cut down on capacity utilisation which is likely to put pressure on their profitability.

Apart from lower profits, the high cotton prices will translate into higher working capital requirements leading to higher borrowings and weaker credit metrics of players, noted ICRA. In the last seven months of this fiscal year, exports of cotton yarn have fallen 23 per cent as China has been pushing its mills to consume cotton produced domestically to reduce dependence on imports.

China’s overall yarn import declined 20 percent in seven months of this fiscal year with a 54 per cent fall in purchases from India. Though cotton prices have fallen since the beginning of the harvest season, it is still 17 per cent higher compared to the same period last year due to the hangover of the shortage faced last year.

This apart, cotton arrivals have slowed down after the demonetisation of high-value currency last month and uncertainty related to the extent of improvement in the domestic crop-size estimate. While the impact of the sharp fall in exports has been cushioned by an estimated recovery in domestic consumption, a sustained revival will be challenging due to the adverse impact of demonetisation on disposable income and consumer spending, averred Roy. At 1.1 per cent, yarn production registered the lowest growth in four years in the first half of this fiscal year while cotton yarn production fell 1.8 per cent during the same period last year.

India could exploit the opportunity presented by Coronavirus

The Coronavirus (COVID 19) outbreak in China is likely to affect Indian textile and apparel industry, in many positive ways.... Read more 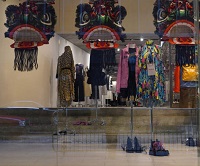