Asia's premier fair for home textiles, Intertextile Shanghai Home Textiles-Autumn Edition 2015, concluded last week, with over 43,000 trade buyers visiting the fair. It was held for the first time at the National Exhibition and Convention Center in Shanghai, spread across 170,520 sq. mt. 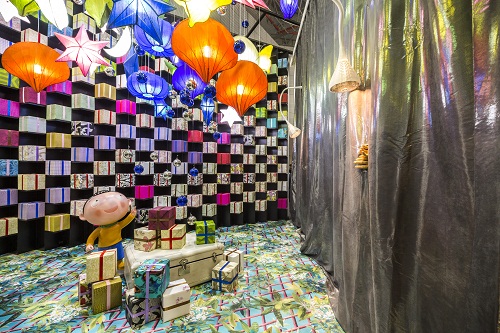 Exhibitors and visitors were satisfied with hall layout and arrangements. The high point was there were 1,402 exhibitors from 30 countries and regions, compared to 1,334 in 2014, the highest in 21-years history of the fair. Nearly 30 Indian participants including DDe'cor, Dicitex Furnishing, G M Syntex, Shingora Home among others made quite an impact at the fair. Handloom Export Promotion Council (HEPC) had 10 participants at their India Pavilion. And Lakshmi Narayan, Superintendent, HEPC expressed his satisfaction over Indian participation in the show.

“We’re delighted that our first edition in this new venue was such a success,” opined Wendy Wen, Senior General Manager of Messe Frankfurt (HK), adding, “But going beyond record figures, there were a number of other aspects that were just as pleasing such as the increase in internationality of participants, and the number of first-time overseas exhibitors who were seeking opportunities in the Asian market. We also had a number of new product zones, as well as returning ones, which proved extremely popular, while our new InterDesign programme attracted huge crowds to the trend area, Trend Concept Show and seminars.”

The fair took place against the backdrop of economic uncertainty in China. However, this did not dampen the enthusiasm of both new and returning overseas exhibitors that target the Chinese mid-range and high-end markets. New exhibitors from Turkey and Korea too shared this sentiment. Many said they do not expect to be adversely affected. “We don’t anticipate any impact on our sales due to the economic situation in China,” argued José Grilo, Executive Manager of Grilo Kitchenware, exhibiting for the first time under the Associacao Textiles Home From Portugal banner. “People here still have money to spend, and we’re in the premium range, not the mass market, which hasn’t been affected. Buyers here appreciate European brands too,” he added. However, Hubert Duh, Executive Director, Messe Frankfurt ( HK) observed, “Yuan may take little longer to recover and in the short term, it may have some impact on global business as well.”

Buyers also appreciated the zones, as well as the internationality of the fair. “It’s very beneficial for us to visit the fair as it gathers suppliers from around the world. The International Hall is our favourite as having the different product zones and country pavilions makes it easier for us to locate our targeted suppliers and products,” David Costantini, Director, Profile Fabrics, Australia said.

The fair’s fringe programs responded positively to the demands of local market. The new InterDesign program was introduced to fulfil the growing need for design and trend information from middle and upper classes of China. In addition to the Trend Area, which was designed by the NellyRodi Agency, a new Trend Concept Show matched China’s top interior designers with eight leading brands including LaCanTouch, Brilliant & Refined, Designers Guild, Uniwal, Jean Paul Gaultier, Pt, Dedar and JAB Anstoetz to bring the trends in the Trend Area to life.